CFE took part in a 2-day fundraising cycle organised by Kerry Crusaders Cycling Club.  The 200km route in West Cork was a fundraiser for one of the Kerry Crusaders team members who was involved in a life-changing car accident. The 20 club members included CFE Managing Director Con Lynch.

The Kerry Crusaders Cycling Club was formed early in January 2012 as a few came together deciding that we needed a cycling club in the area.  The cycling club is based in North Kerry, with members from Asdee, Ballylongford, Ballyduff, Lisselton, Listowel, Duagh, Tarbert, Finuge, Lixnaw, Moyvane and Ballybunion.  The club has members of all ages and abilities and is always looking to have new people join up. http://kerrycrusaders.cc/ 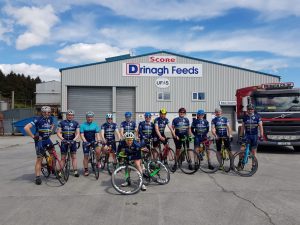