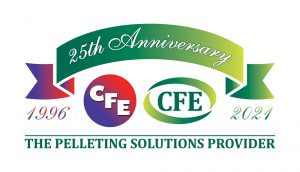 Con Lynch, Pat Dennehy and the CFE team are proud to celebrate their 25th Anniversary

Thank you to everyone for the business and support over the last 25 years. Since establishing the business on 8th April 1996, we have gained good market share and built a strong, long-lasting customer base. We are proud of the strong relationships we have built with customers and suppliers. The support from everyone including our staff has been amazing and we are an integral part of the communities in Haydock and in Castleisland. We are looking forward to the next 25 years. Sadly Covid-19 has meant our anniversary date celebrations have been low key and socially distanced. However, we look forward to celebrating in style later in the year or when restrictions are lifted to allow us.

Con Lynch and Pat Dennehy set up Compound Feed Engineering (CFE) in Castleisland, Co. Kerry.  An engineering business with 3 employees, CFE concentrated on die and roll refurbishing for the island of Ireland market.

CFE started selling new dies in Ireland and began refurbishing rolls and dies for the UK market.  They invested in their first water pressurised cleaning and countersinking system, a unique and progressive automated solution in this area of engineering.

Employing 2 staff, CFE set up its first UK die and roll refurbishing operation in Wigan, Greater Manchester and within a year, having secured the patent for the Water Pressurised Cleaning and Counter Sinking System, CFE added a second automated solution to its works.  By this time, CFE was selling new dies to both the Irish and UK markets.

This year saw CFE moving to mainland Europe.  They purchased an industrial unit in Helmond, Holland.  Using the same cleaning and counter-sinking process, they introduced further innovative technology in grinding, to augment their engineering work.  They concentrated on die and roll refurbishing at Helmond and sold the service through a domestic distributor rather than directly to the market.

CFE bought a UK Die manufacturing facility from OSL in Sheffield.  They moved the OSL plant to the Haydock plant which included the installation of gun drilling machines for the manufacturing of dies.

By 2009, investment in the Haydock facility had grown and the company’s expertise had become highly regarded across the markets.  With a view to making its Haydock plant a centre of excellence in die and roll refurbishing and in engineering, CFE decided to re-structure and rationalise.  They sold their building in Holland and moved their Irish production to the UK site.

CFE bought a building in Castleisland, Co. Kerry, to become the permanent address of its Head Office (which had continued to operate from Castleisland since 1996).

In 2015, CFE also developed a strategic plan to become the preferred supplier of pelleting consumables and new equipment to the feed and bio-mass sectors across the UK and Irish markets.  Since then, CFE has sold up to 50 CPM Pellet Presses, 40 Conditioners, Hot Start Hygienic Units, Grinders and other supporting process equipment.  CFE has sold over 30 refurbished Pellet Mills for export across the world.  At the end of 2018, CFE installed 3 presses at a major RDF plant in Ireland and, simultaneously, another 3 presses were installed at an RDF plant in the UK.   CFE’s plan is to double its footprint in the market within the next 5 years.  Its’ Cost per Tonne (CPT) model has gone from strength to strength and CFE now has 26 customers on contract across the UK and Ireland.

CFE now has 26 employees, with engineering and sales function teams operating from the UK and Ireland.  In addition, an Export Sales function has been built from its successful trading in used equipment.

The company ethos and values have remained unchanged since the 8th of April 1996.  CFE has developed, won and expanded the business by forging trusting relationships and providing tailor-made valued and sustainable solutions for its customers.

CFE believes in honesty of performance and views itself as a partner with its stakeholders, including its highly regarded and experienced team of employees, its customers, key suppliers, institutional providers and neighbours.

Con Lynch & Pat Dennehy are proud of the CFE Team and would like to recognise them.  They are loyal, honest and dedicated.  They have a strong work ethic and co-operate very well with each other across both countries.  CFE would also like to pay tribute to its past employees who all made a contribution of their own. 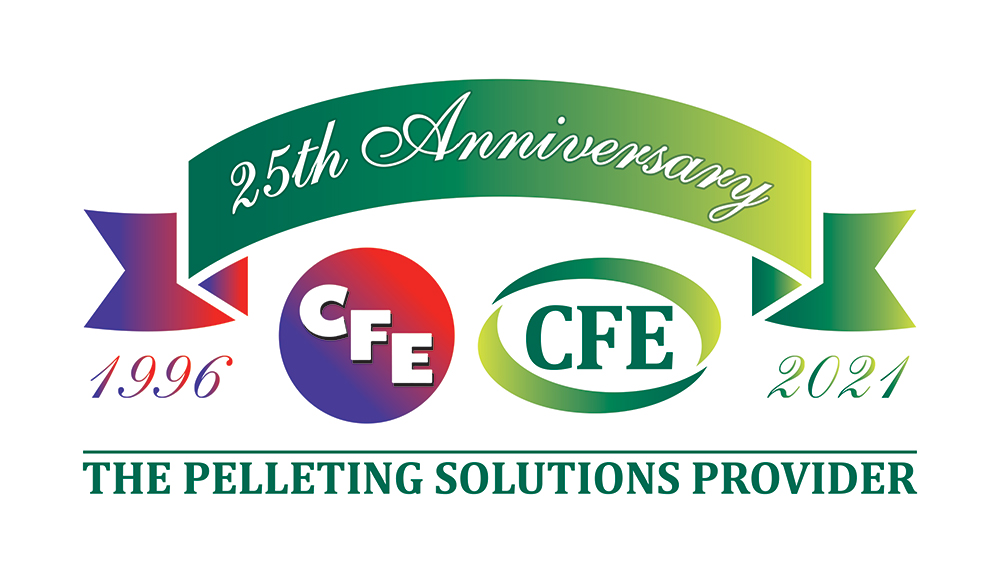 CPM have completed a deal to supply two refurbished CPM pellet presses to Egypt. The first press is a CPM 7930-8 with a 250Kw 1500 rpm motor.

CFE will be attending Victam 2022 with a trade stand. The event will take place from May 31 - June 2, 2022 at the Jaarbeurs, Utrecht, The Netherlands.